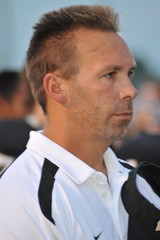 On Monday, December 13 Westfield Director of Student Activities Terri Towle announced Kyle Simmons as the new Head Varsity Football Coach for the 2011 season. Coach Simmons has been a member of the football staff since the school opened in 2000 and is a health and physical education teacher at Westfield where he primarily teaches personal fitness.  He brings close to two decades of football knowledge and experience to the program. Coach Simmons takes over the duties from long time friend and mentor Tom Verbanic.
Coach Simmons is a 1991 graduate of Salisbury University where he was a two year letterman in football. In 1992 he used his degree in elementary education to take a job with Fairfax County teaching 5th grade at Fairview Elementary in Burke, VA. After the urging of a parent, Coach Simmons visited Francis Dall at Lake Braddock Secondary School to discuss an opportunity coaching varsity football. His first year coaching was 1993 and he remained on the staff at Lake Braddock until leaving for Westfield at the end of the 1999 season. Lake Braddock had the most wins in the 90’s of any football program in the Northern Region.
Coach Simmons began coaching football and track at Westfield in 2000. At the same time he took a job teaching 7th grade biology at Rachel Carson Middle School. It was then that he realized he wanted to be a head football coach. In order to get into the building, Coach Simmons returned to school to get his endorsement in Health and Physical Education. In 2004 a teaching position opened and Coach Simmons became a part of the teaching staff at Westfield HS.
In 2005 Coach Simmons was the special team’s coordinator and in 2006 he took over the defensive coordinator position after the retirement of long time colleague and friend Carroll Craig.
Coach Simmons is joined by wife Janet Simmons, 7 year old daughter Summer and stepsons Kyle and David Rodgers, who have been a huge supporters of Westfield Football and Coach Simmons.
Coach Simmons met with the football team Monday after school to discuss expectations and the future of Westfield Football. He emphasized the importance of doing things the right way, preparing for success, communication, and developing relationships. His first order of business is to meet with current football coaches in order to put together a staff for the 2011 season. Off season weight lifting workouts will begin on Monday, January 10th. For those players not enrolled in personal fitness, the weight room will be open during Bulldog Block Tuesday-Thursday, after school on Monday and Wednesday, and 6:00 a.m. Monday-Friday.
For more on the hiring of Coach Simmons visit the following links:
http://www.washingtonpost.com/wp-dyn/content/article/2010/12/13/AR2010121303910.html
http://mvp.gamedaymagazine.com/rumor_mill/2010/12/westfield-names-new-football-coach.php
Contact:

YOUR GAME HAS CHANGED!